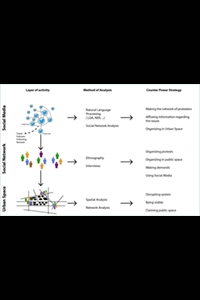 The black lives matters movement has risen in response to social injustice in the African American community in the united states, specifically concerned with police shootings and brutality. Similar to many modern movements in the age of information, there has been many protests around the United States that utilize mobile technologies and social media to diffuse information, organize, and occupy public space to demand justice and equality. In this research we study one recent protest that happened in the United States; the protests in the aftermath of the shooting of Keith Lamont Scott at Charlotte. We will study the events in three different layers: social media, physical social network, and public space. To understand the relationship between these three layers, we conducted focus group studies with protesters and activists. We then used social network analysis and natural language processing to understand the dynamics of this event through data collected from Twitter. We will finally compare our knowledge created from the focus groups and the results of our data analysis while focusing on the usage of public space. We will finally discuss the different groups of actors, different types of public space, and the diverse and important usages of social media in these processes.