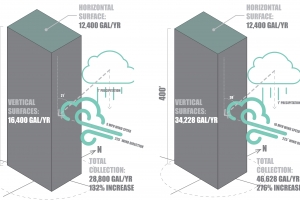 The tool outlined here works by importing the weather data for a given location from the National Oceanic and Atmospheric Administration (in our initial studies we used a five-year window). This data is first simplified to include only days where measurable rainfall occurred. The data is then further stripped to only include the measurement of precipitation, wind direction and velocity, presuming a median rain drop size. The tool functions by projecting rays onto the building mass following the angle calculated that the WDR would fall during that given day, and calculates how much of the WDR would hit each of the sides of the mass.

Based on these calculations the tool can then provide a total annual calculation for WDR on each facade or can rotate the mass based on a user specification to test for the optimal orientation of the given shape. Predictably, the optimal orientation being that in which the greatest surface area of the mass is facing the median windward direction on rainy days, which will allow the most amount of WDR to hit the largest surface area. The user can specify the amount of variation in the rotations to determine how computationally intensive the testing is.

As seen in Table 1, both form and orientation play significant roles in the amount of WDR that hits each facade. By adding the facades of the mass into the calculations for rainwater harvesting, the percentage of WDR that interacts with the form at least doubles for each instance, except for forms 5 and 6 - both of which contain larger horizontal surfaces and shorter facades than forms 1-4. The increase in WDR on the facades through optimal orientation on the site differs for each form. Re-orienting forms 1 and 3 from their original test position once again doubles the amount of WDR on the facades, whereas re-orienting forms 2 and 6 has minimal effect on the amount of WDR. The intent of this tool is to aid designers in massing and orientation studies. Using Revit’s conceptual mass tool allows designers to study iterations quickly, analyze them using Kaktos, and make changes accordingly.

Lastly, the tool can be used to calculate the optimal locations for rainwater collection to minimize the frequency of large quantities flowing along the surface of the building. This aspect of the tool works by tracing the gravitational flow of the water along the facade using a sphere-mapping method (Beorkrem 2013). Sphere-mapping uses a technique of intersecting spheres with a complex mass to find the approximate circular shaped intersection between the mass and the sphere. The shortest line between the center of the sphere and this circular intersection represents the likely path for the water. Using the endpoint of the shortest line, another sphere is placed and this process continues iteratively while a total water amount is tallied to indicate when a total reaches a user defined amount at which point the water can be collected. Placing intermediate collection points on the facade of a building removes the water before it reaches the ground, reducing the amount of urban runoff and preventing the unnecessary use of energy to pump the water back up through the building. 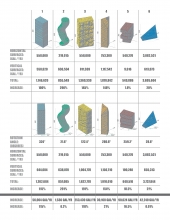 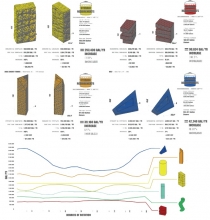