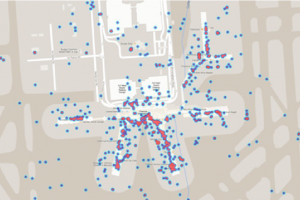 By Eric Sauda and Alireza Karduni

As smart phones have become part of everyday life, communication technology and its role in shaping cities and social life became an essential topical area in architecture and urban design. The enormous volume of data being generated (estimated to reach 438 billion messages per day in 2019) [Ericcson 2016, Arce 2015] now provides new information about the social realities of cities. This development has expanded research and teaching the areas of visual analytics, urban modeling, and communication studies [Chang 2007, Offenhuber 2014, Waddel 2002], which have become important resources in environmental design disciplines. Our work expands upon this discourse, addressing the intersection of the built environment and virtual communication.

Mobile social media (Twitter, Four Square, Instagram, etc. with mobile devices such as tablets and smart phones) plays a particular role in our research as it combines many important geospatial, temporal and semantic elements as a data source. These elements have been considered important in conducting geospatial analysis [Andrienko 2010]. Twitter’s online social networking service is particularly interesting both for its widespread use and the API (Application Programmer Interface) that allows access to data for software development and research purposes [gnip 2016]. Twitter is also well studied (for a ten year old service) and has been used toward understanding a variety of urban scale phenomenon from locations of traffic accidents or other emergencies and unplanned events such as Tahrir Square, to understanding spatial movement of food trucks [MacEachren 2011, Tufekci 2012, Wessel 2015]. We recognize the limits of Twitter data; it can be demographically skewed toward the younger and the wealthier, and it is only reliable in large, aggregated data sets. Our results are subject to verification by other sources, but the methods would remain applicable.

Our interest in mobile social media investigates the relationship between the flow of information generated by mobile social media and the urban form of the city. One extreme position suggests information and communication technologies (ICT) have rendered location meaningless; such a position was taken by Melvin Webber [Webber 1964] as early as the 1960’s based on his analysis of the extreme sprawl of American cities such as Los Angeles. At the other extreme are theorists who believe that the essential character of cities has remained more or less unchanged; new urbanism [Leccese 2000] is the latest such belief in the “timelessness” of urban form.

We have tried to make both positions sound credible, but both the rearguard and the avant-garde ignore current urban conditions in favor of longing for the past or promoting a bright future of uncertain prospect. Our effort is focused on finding specific on-going evidence of ICT as an indicator of the spatial form in the city, and conversely how the form of the city influences the uses of ICT. Mobile social media data is an ideal empirical source for such an analysis, combining spatial, temporal and topical information and providing large data sets for analysis. It is important (and difficult) because it is unstructured data, mostly unfiltered by existing categorization.

In this paper, we present three models of how to approach the analysis and use of Twitter data. The first two began as focused attempts to accumulate and explore large-scale Twitter data. The third is a model that incorporates lessons learned from the first two models into a novel visual analytic interface. This work is aimed at developing epistemological alternatives; we are continuing to use our insights to study both the nature of ICT in the city and on the usefulness of this approach for practitioners and researchers. Our team includes professors, researchers and advanced students from architecture, urban design, computer science and visualization.