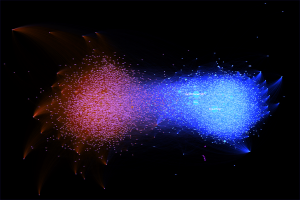 Activism is a complex phenomenon. Indeed in the current atmosphere and with the prevalence of information technology, activism happens across many different layers. But has techonology transformed the way we demand justice? in the case of the Charlotte protests, we learned from our focus group studies that social media and information technology played a crucial role in bringing people to the public space. Our interviewees gave us a narrative about which places in the city were used and a rationale for why those places were important. Many of these places were identified as being important due to their strategic location, better accessibility and their proximity to many economic activities in the city.

Our interviewees all used social media of different types to diffuse information, to contact friends and organize and plan future events. However, every social media is used differently. Text messaging is used to virtually connect with friends and acquaintances. Encrypted messaging is used to communicate without the fear of being monitored. Some social media such as Facebook has features such as Events and chat group which enables better organization for future events. Some social media such as instagram and snapchat are multimedia focused and they are used to share images and videos of protests as they happen. Live streaming plays a crucial role in motivating people by offering the most realistic snapshot of a protest. Twitter, which is the most public but with the most restrictions, offers a platform for people to communicate with a large audience in a streamlined manner. News, arguing and some spatial organization are some usages of this form of social media.

While we recognize that different social media have different functions, we analyzed Twitter mostly due to the wide availability of the data and to get a better understanding of the dynamics of social media in the context of Black Lives Matter protests. The rich unstructured nature of social media data offers many challenges but enables us to learn greatly about how people interact in social media.

Analyzing the timestamp of tweets in the Charlotte protest shows us that Twitter responds rapidly to the events of a protest. This feature makes Twitter a very powerful tool for mobilizing and discussing protests as they happen. Even though Twitter allows users to geolocate their tweets, the public nature of the platform does not invite many people to enable this feature. Most of the spatial organization using Twitter happens through text, images, and videos.

By analyzing the text of tweets, we were able to extract location information. Many tweets do not include spatial information, however, by studying the frequency of how each specific place in Charlotte was mentioned, we were able to show that the most important places in the protests identified by our interviewees are also reflected in people’s tweet. This information brings us to the point that Twitter is not used uniformly by everyone.

To go further in depth into this point, we analyze our dataset of 1.3 million tweets through the lens of social networks. our social network analysis shed light to many interesting and important features about the usages of social media. Community detection allowed us to see that users interact mostly with individuals with similar stances to protests. Our dataset was categorized into two major communities. One community very supportive of the Black Lives Matters protests in Charlotte and one critical.

protesters. On the other hands, people who are supporters of the protests, diffuse information about the detail protest places to mobilize and influence people to attend more.

Finally we can observe that the top influencers in our social network include many News agency and journalism related users, as well as politicians and professionals activists. This can again, hints us to the fact that different social media have different functions, and the public nature of Twitter allows for more news related and on the ground information, and other media might have better capabilities in organizing future events. In the future, in order to have better understanding 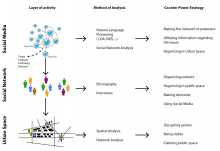 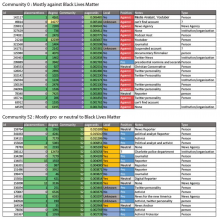